ALL RELIGIONS SPEAK OF HARMONY AND PEACE – P.N. Bhagwati 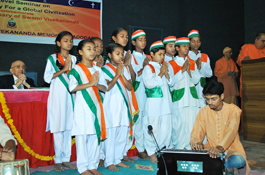 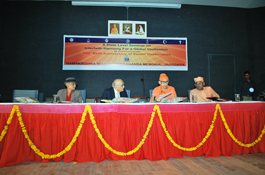 “All religions of the world speak of harmony and peace, non-violence and truth, so there should not be any quarrel between followers of various faiths.” This was expressed by Justice P.N. Bhagwati, former Chief Justice of India while inaugurating a State Level Seminar on “Interfaith Harmony for a Global civilization” organized by Ramakrishna Mission Vivekananda Memorial, Vadodara on 27 th March as a part of 150 th birth anniversary celebration of Swami Vivekananda.

The seminar started with the prayers of different religions rendered by students of various educational institutions. Swami Bhajananandaji Maharaj, Asst. Secretary of Ramakrishna Math and Ramakrishna Mission, Belur Math, Howrah, ( W.B.) in his keynote address pointed out that the people all over the world are facing the problems of loneliness, meaninglessness of life, etc.; so all the religions should jointly endeavor to bring peace and solace to humanity rather than creating friction. Seven eminent speakers of different faiths spoke on the viewpoints of their faiths on the subject of ‘Interfaith Harmony’ in the second session.

Three eminent speakers connected with media presented their views on ‘Interfaith Harmony and Media” in the third session. Shri Kantibhai Bhatt, the popular columnist told that Swami Vivekananda for the first time had carried out globalization of Indian Spiritual Culture in the World’s Parliament of Religion held in Chicago in 1893. He added that media can play an important part in spreading the message of Inter Faith Harmony and bring global peace if it does not become prey of globalization and commercialization.

Four eminent Educationists spoke on the subject – ‘Interfaith Harmony and Education’ in the fourth session. Ms. Jyotiben Thanki, the popular Gujarati writer and Educationist pointed out in her speech by giving examples as to how small children easily take up the message of interfaith harmony.